We Need To Rethink Disabled Access In Public Places 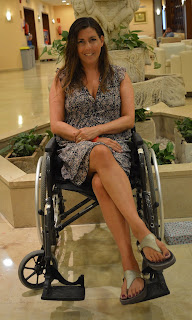 After over two years in a wheelchair I can safely say the world is not a wheelchair friendly place. Yes, there are rules and regulations to follow and there are some measures in place to make places accessible. The Equality Act 2010 states that “public places must take positive steps to remove barriers disabled people face to ensure we receive the same service, as far as this is possible, as someone who is not disabled” (taken from www.citizensadvice.org.uk). That doesn’t mean common sense always comes into play though.

I’ve just spent the past 11 nights in a hotel in Ibiza. A beautiful holiday and quality time with my family in the sun. We researched the hotel before we went. As someone who is disabled, I feel like I’m almost qualified as a detective, trying to find a hotel with suitable access for my wheelchair.

The hotel we picked ticked all the boxes. Three lifts, ramps everywhere, we were on to a winner. On arrival it soon became clear that although these were indeed in place, the actual people in the wheelchairs (there were three of us while I was there) were an afterthought. Tables, sunloungers and trollies were placed at the end of the ramps. Lifts so small I couldn’t push myself into them with my self propelled wheelchair. Thankfully I had family with me to move items and get me into the lifts but there was no way I could have managed alone and a motorised scooter just wouldn’t have been possible. I realise it would have fallen under Spanish regulations and not ours but it highlights the issues disabled people face.

It’s not the first time I’ve had problems in public and i’m sure it won’t be the last. Ramps that have been at the bottom of a cupboard have had to be dug out for me. Special entrances to get into places draw even more attention to my condition. As a person in a wheelchair, I don’t want to stand out any more than I already do.

I also want to be independent. I don’t want to have to ask for help. I’ve had nothing but kind offers from people who have carried me, lifted me and gone off to find the one person in the place with the key for the back door. What I want is to be able to access buildings like anyone else. As mentioned in the Equality Act, I want the same level of service as someone who is not disabled.

We might be a small minority but what about inclusivity? I don’t want to be different. I don’t want everyone staring at me while I’m carried around because my wheelchair won’t go up the stairs. It has reduced me to tears on many occasions and the humiliation is heartbreaking for me. It’s another reminder that the world doesn’t see me as important. That I am an inconvenience, another cost for businesses to pay and the hassle of getting the right equipment.

So what can we do about it? As a community let’s push public places to include disabled people, not just as minimum regulations, but as people with feelings. Put yourselves in our shoes. Would you want to live an independent life? If the answer is yes then please look at your access. Are all your customers treated as equals? That’s what we should be aiming for. I understand we are not their main focus and only represent a small proportion. If they have things in place then that’s great, make sure we can access them easily and make us feel like any other able bodied person. We want to be independent and feel included and there are many changes that need to be made to make that happen.

This blog was first published by The Huffington Post here

Posted by Blogging Mummy at 07:31 No comments:

Adjusting To A New Shadow - Life In A Wheelchair 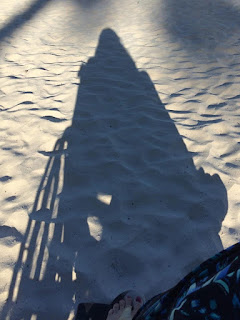 This is a photo that I took on holiday last year but it’s a particularly poignant one for me. My shadow shows me in a wheelchair and disabled but inside I’m still the same person I always was. My shadow may be different, my life may be different but I’m still me. It’s photos like this that hit hard how others perceive me. They see the wheelchair, not the person who is in it. I feel like it’s my job to change this perception and remind people I’m still the person they once knew.


I’m still Katy. I still have the same personality. I still love cheesy pop songs, dancing (albeit wheelchair dancing now), singing and going out with friends. I still get drunk on two glasses of wine! I’m still obsessed with historical fiction books and enjoy watching reality tv. I still have the same sense of humour and I’ve developed a love of writing which has become my purpose in life, alongside being a mum. I still want to be invited on nights out even if I can’t always make it. I don’t want to become invisible just because I happen to use a wheelchair to get around.

My body is heavier thanks to the side effects of the many medications I take and, of course, older with wrinkles starting. The adjustments to my appearance have been tough for me to deal with. I’m very much about promoting body confidence and loving who you are but that has been a personal challenge for me. Putting on weight is out of my hands due to the medication I’m on, it's not something I have control over and exercise is out the question with the type and frequency of seizures I have. I’ve had to lower my expectations and not beat myself up for not having the perfect "Love Island" body. I’ll be 40 next year and I want to celebrate that. I’m lucky to be alive. Not all people with epilepsy make it to 40 and I went undiagnosed for 12 years. I have to accept who I’ve become and embrace it. I might not look like I did in my twenties but who does?

Strangers and aquaintances don’t like to ask why I, overnight, went from a normal, healthy person to not being able to walk. The truth is, I’ve been ill for almost 14 years. Yes, I’ve had periods of being better and lived a fairly functional life, but I hid a lot of my symptoms from everybody except my Husband. I didn’t want to be dismissed by doctors yet again. I couldn’t go through the disappointment, after a terrible experience I had when I first got ill, back in 2004. This time I declined very rapidly in February 2016 and have been in a wheelchair ever since. Thankfully I've finally got a proper diagnosis, with Epilepsy, although it still isn’t under control. Now there is no hiding my condition. It’s there for everyone to see whether I like it or not.

I’m always happy to explain my condition and I make videos about it on my YouTube channel, explaining the different types of Epilepsy I have and dispelling some myths surrounding it. I’d rather people came to talk to me than ignore me. Don’t be afraid to speak to people in wheelchairs. We are still human and a lot of us don’t think of ourselves as being in one until we catch sight of that shadow on the ground. Remember the person on the inside, don’t just see the chair.

Here are three short videos I made, which briefly explain the types of seizures I have and how they affect me. I also try to dispel some myths about epilepsy itself. Please follow my YouTube channel for other videos I upload!


Posted by Blogging Mummy at 13:14 No comments:

My Breastfeeding Journey Didn't Stop When I Finished Feeding My Children 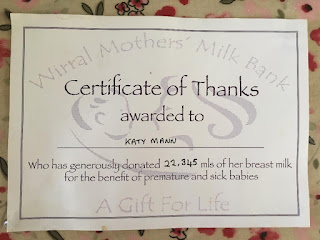 You’re probably sick of hearing about World Breastfeeding Week but bear with me, my journey is a little different. Yes I breastfed my three children but that is only a small part of how breastfeeding has affected my life for the past 12 years. Actually if you speak to any mum, every journey is different. It doesn’t matter if you breastfeed, formula feed, combi feed, however you do it, we all have a unique journey.
My eldest son was my most difficult. Reflux meant he was sick several times a day, didn’t put on weight and I constantly questioned myself and if I was doing it right. My second son was a very similar story but sadly he passed away from meningitis at 15 weeks old. Our breastfeeding journey came to a very abrupt end but my own personal story continued. I carried on expressing my milk for months after his death and donated 22,345 mls to Wirral Mothers’ Milk Bank who used it for premature babies. My third experience, with my daughter, was much easier and in total I breastfed my children for six years and five months.
That is only part of my journey though. In November 2007, five months after my eldest son was born, I trained to become a peer support worker. Mum-to-mum support in other words. I didn’t know at that point how many people would reach out to me for help. I had a fantastic mentor and together we went to speak to women who were unlikely to breastfeed. I took my 11-month-old son into a class of Year 11 girls and breastfed him in front of them. I’ve never seen so many shocked faces! Not only was it taboo to them to consider breastfeeding (rates were particularly low in that area) but he was almost one so he was doing nursing gymnastics (on, off, run around, back on again).
I also went to speak to a group of pregnant teenagers who were open to breastfeeding but their families were dead against it. I gave words of encouragement and again a demonstration but I knew they were fighting such a tough battle. I often wonder about them and if they were able to push past those barriers. I can only hope I had some small amount of influence on them.
I became a volunteer at my local Children’s Centre and each week offered advice, help or just an ear to listen to those who needed it. I became an advocate for people who needed help, taking part in local news segments and online support groups.
I’ve always been very vocal on social media about what I have learnt so friends have been able to contact me and I’ve supported them through the tough times. My motto is “my inbox is always open and if I don’t know the answer, I will find a person who does”. Mum-to-mum support is vital and that doesn’t matter how you choose to feed your baby. I would also offer the same support to anyone who was formula feeding.
I’ve been advocating for mums for almost 12 years now and I will continue to do so as long as the need is there. As there are more and more cuts in services we need more people to do the same. Let’s forget the mummy wars and be there for each other. It’s something I feel very passionate about. If you need me, I am always there to listen. Let’s stop the judgement and don’t be afraid to ask for help.
This blog was first published on the Huffington Post website here

Posted by Blogging Mummy at 11:49 No comments: